Dad Asparagus (real name Mike) is an astronaut, Junior's father and Lisa's husband. He has appeared in many VeggieTales videos, starting with Where's God When I'm S-Scared?. He often appears opposite Junior whenever a video requires a father figure in such videos as Larry-Boy and the Fib from Outer Space, Jonah: A VeggieTales Movie, and Are You My Neighbor?. He is wise and kind -- the perfect father. He usually plays himself, but sometimes other roles. He is clueless about what happens in Junior's room. He is brave, but is too scared when Junior is in danger. It was revealed that he has a job as Junior's teacher in Larry-Boy and the Rumor Weed. He is not to be confused with Mike Nawrocki.

He made a brief cameo in The Song of the Cebu in the back of one of Larry's slides from the airport. 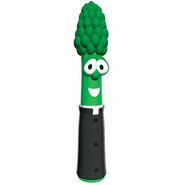 Dad as Rev. Gilbert in An Easter Carol

Dad as The Profeser in "Larry's Lagoon" on "God Wants Me To Forgive Them?!"

Add a photo to this gallery
Retrieved from "https://veggietales.fandom.com/wiki/Dad_Asparagus?oldid=21570"
Community content is available under CC-BY-SA unless otherwise noted.