Start a Wiki
LarryBoy and the Bad Apple is the 29th episode in the VeggieTales animated series, and the third instalment of the LarryBoy adventures. The video was released in 2006 and is the first VeggieTales to be available only on DVD and the VHS format. It is also the first series to be released on Blu-ray in High Definition. Subtitled "A Lesson in Fighting Temptation", it emphasizes that we can't fight temptation alone; instead we should draw on the support of others (family, friends, and God) to help us.

Archibald Asparagus (as Alfred) joins Bob the Tomato and Larry The Cucumber as Larryboy on the countertop. He and Larryboy have received a text message from a kid from Stockbridge, Massachusetts concerning one viewer's struggles with the temptation to play video games all day. Pushing the "frail and helpless" tomato out of the way, they present the story.

As the story begins, Bumblyburg is preparing to celebrate its 300th birthday. There is concern, however, about a mysterious web that has appeared around the statue of Obadiah Bumbly in the town square. While the townspeople fret and prepare for the celebration, LarryBoy is in the Larry-Mobile on his way back to the Larry-Cave. He is eating Reese's Peanut Butter Cups; Alfred, speaking through the vehicle's monitor, reminds him that eating too much chocolate will make him ill and compromise his abilities as a superhero.

Back at the cave LarryBoy becomes sick and after he went to the bathroom , he lays down on the arm chair feeling tired and He admits that he can't control his chocolate addiction and agrees to let Alfred help him. They begin an exercise regimen and aim to limit, rather than eliminate, the chocolate in his diet.

Meanwhile, the Bad Apple is formulating a plan to derail the city's celebration. Her strategy is to enslave everyone by their own personal temptations; once they are incapacitated, she will be free to take over the city of Bumblyburg. She tasks Curly the Worm with identifying the weaknesses of each of the city's most important citizens: Mayor Blueberry, Reporter Petunia, and LarryBoy. Eliminating these three will cripple the city's leadership, communication, and law enforcement, she believes.

She begins by paying a visit to Mayor Blueberry. Her weakness is vanity. Bad Apple preys on this weakness, convincing her that as a representative of Bumblyburg it is her duty to look her best. She spins a web, a trap, in which she claims there are countless beautiful things to improve the mayor's appearance. The mayor, hearing her vanity validated, steps into the trap.

Next she pays a visit to Petunia, whose weakness is video games. Petunia realizes her important role in keeping the city informed, but admits that she could use a break. Bad Apple spins another trap, this one containing a test version of the latest, unreleased video game system. The temptation is too much; unable to resist, Petunia steps into the trap to play. This video game is reminiscent of the light cycles from Tron.

Meanwhile, back at the Larry-Cave, Alfred has discovered that the mysterious webs have plagued Bumblyburg before. He goes to the Historical Society to do some research. On an old, scratchy film reel he discovers a scene from the distant past when an apple named Ephraim Apply tried to ensnare the settlers of the new town with diversions at an establishment called Apply's Fun House. The people succumbed and the town suffered, falling under the spell of Ephraim. Obadiah Bumbly arrived in time to liberate the people, and Ephraim Apply was banished from Bumblyburg forever.

The Bad Apple pays a visit to LarryBoy in the Larry-Cave, and, having learned of his weakness for chocolate, uses it to gain entrance to the Larry-Cave. Little by little, she dampens his resolve until he too falls into a trap designed specifically for him. While the Bad Apple tries to tempt LarryBoy into overindulging in chocolate, she wears a purple top hat and recites poems much like Willy Wonka. With Larry indisposed in the "Chocolate Room", she easily breaks Alfred upon his return, ensnaring him by the television in front of his favorite cartoon. With Bumblyburg's leaders and heroes out of the way, the Bad Apple proceeds to the town square to fulfill her great-uncle Ephraim's destiny. She quickly sets up shop: the new Apply's Funhouse 2. She and her sidekick, Curly the Worm, begin to luring the helpless citizens into the funhouse, promising non-stop excitement.

At the Larry-Cave, Alfred and LarryBoy realize that they need each other's help to fight temptation. Working together they dissolve the webs of their traps, which prove to be susceptible to the sports drink "Umph!" Freed at last, they quickly set about rescuing Mayor Blueberry and Petunia; then they all rush to the town square, joining forces to fight temptation together. After having Curly arrested, LarryBoy goes to battle against the Bad Apple. The funhouse topples and nearly crushes a mother and her baby, but LarryBoy saves them, flinging the funhouse, along with the Bad Apple, out of the square and out of Bumblyburg.

After the whole ordeal, everyone celebrates. The celebration is shown being played on a video screen, and a metal spider-like leg reaches up to turn the video screen off.

As usual, the lessons learned are reviewed on the countertop: that giving in to temptation prevents us from being the people God wants us to be; and that we can't always fight temptation alone. The verse comes from Matthew 26:41. And Bob, feeling left out, makes an unexpected appearance as "The Red Wonder" (or Bobbin. But, he was leaning toward Red Wonder). He tried to show the gang his theme song (which turned out to be the "What We have Learned" song). After they say goodbye, LarryBoy shows Bob how to do a theme song. A band named Shux (that's their name because they're corn)comes out and plays a song called, "Rock On, LarryBoy". 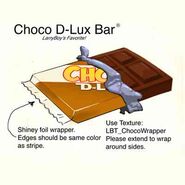 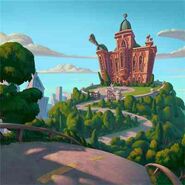 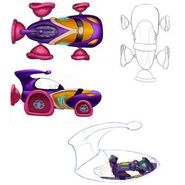 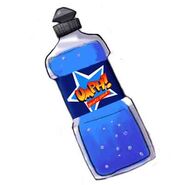 Add a photo to this gallery
Retrieved from "https://veggietales.fandom.com/wiki/Larry_Boy_and_the_Bad_Apple?oldid=17046"
Community content is available under CC-BY-SA unless otherwise noted.