Larry the Cucumber is, as his name implies, a cucumber. He is Bob's best friend, and one of the main protagonists of the series and the tertiary antagonist-turned-anti hero of Jonah: A VeggieTales Movie. For many shows he has acted as co-host for the show with Bob, such as Lyle The Kindly Viking and Where's God When I'm S-Scared?. He was replaced as host in Josh and the Big Wall and Abe And The Amazing Promise by Junior Asparagus and in Sumo of the Opera by the little cucumber puppet Lutfi. He also acts as the host for the intermission segment "Silly Songs with Larry". He is also a character called "Elliot" in The Pirates Who Don't Do Anything: A VeggieTales Movie.

Larry has also made appearances in another Big Idea series, 3-2-1 Penguins!. A vacuum cleaner that resembles Larry appears in Trouble on Planet Wait-Your-Turn, with the credits of the episode even crediting Larry the Cucumber as the voice actor for this character. He is also referenced verbally by Kevin in Runaway Pride at Lightstation Kilowatt during the "Space Surfing Super Star" song.

Larry as Daniel in Where's God When I'm S-Scared?

Artwork for Larry-Boy and the Bad Apple

From the Silly Song "The Blues with Larry"

"Master Larry, enough with the puns!"

Larry as Capt. Douglas Crewe in The Penniless Princess

As Abednego in Rack, Shack & Benny

Day clothes in Larry-Boy and the Rumor Weed

Moe and the Big Exit

From the Silly Song "Pants"

"Elevenscore and fourteen years ago..."

Stewart Green (It's a Meaningful Life)

Ear-a-Corn (Lord of the Beans)

Joshua (Josh and the Big Wall)

I Love My Lips

Millward Phelps without his hat

Add a photo to this gallery 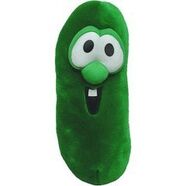 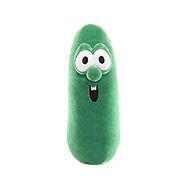 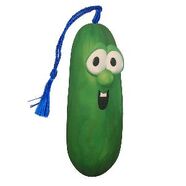 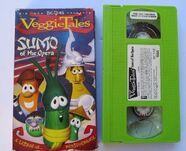 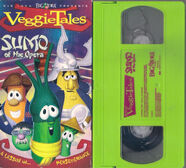 Add a photo to this gallery

Retrieved from "https://veggietales.fandom.com/wiki/Larry_the_Cucumber?oldid=21700"
Community content is available under CC-BY-SA unless otherwise noted.