Lyle the Kindly Viking is 15th episode of the VeggieTales animated series. It was released on March 24, 2001. It features two short stories about sharing, one a parody of Shakespeare's Hamlet, the other a parody of a Gilbert and Sullivan comic opera. 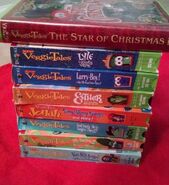 Add a photo to this gallery
Retrieved from "https://veggietales.fandom.com/wiki/Lyle_the_Kindly_Viking?oldid=19659"
Community content is available under CC-BY-SA unless otherwise noted.