Petunia is a female rhubarb in the Veggie Tales series. She replaced Miss Achmetha as the next main character for the show. She is known for believing that beauty on the inside really matters. She is often cast as the role of the love interest of Larry The Cucumber. She is voiced by Cydney Trent. She is a red-headed vegetable usually seen wearing a braid. She first appeared in Duke and the Great Pie War. She later appeared in Minnesota Cuke and The Search for Samson's Hairbrush, LarryBoy and The Bad Apple, and Moe and The Big Exit. She also has a role in The Pirates Who Don't Do Anything: A VeggieTales Movie. She made an appearance in Minnesota Cuke and The Search for Noah's Umbrella and in a silly song in Pistachio: The Little Boy That Woodn't. Her second princess themed is Sweetpea Beauty. She has an alter ego named Vogue in The League of Incredible Vegetables. She recently played Stewart (Larry the Cucumber)'s wife Donna Green in It's a Meaningful Life where she was the mother of twin boys, Arch and Barney Green and the adoptive mother of Emma Green. 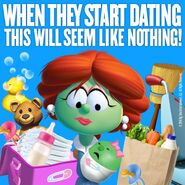 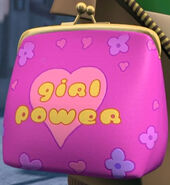 Petunia's Purse
Add a photo to this gallery
Retrieved from "https://veggietales.fandom.com/wiki/Petunia_Rhubarb?oldid=20361"
Community content is available under CC-BY-SA unless otherwise noted.